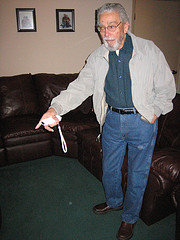 Many people embraced Nintendo’s Wii and “exergames” like Wii Fit with the hopes that it would get them off the couch and provide a fun way to stay in shape. However, as Gretchen Reynolds reports in today’s New York Times, researchers are finding that the workouts just aren’t intense enough to provide real benefits to younger people. However, a few studies are starting to indicate that the elderly can improve their physical fitness through these games.

Two studies cited in the Times article found that elderly participants saw significant improvements in balance using the Wii Fit’s exercises as well as fun games like Wii Bowling. Improving balance is important to preventing falls, which are the leading cause of injury-related deaths among the elderly.

With the holidays coming, it makes you think if maybe this year, it’s time to give Junior a good book or sweater and reserve the game console for grandma and grandpa.